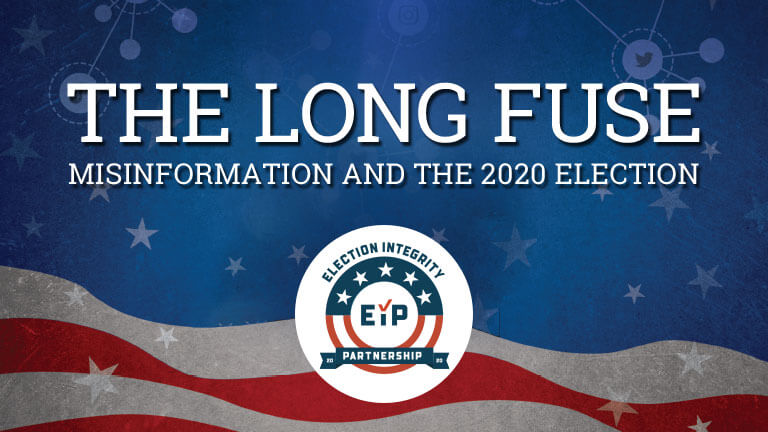 Stanford Internet Observatory (SIO), the University of Washington’s Center for an Informed Public (CIP), Graphika, and the Atlantic Council’s Digital Forensic Research Lab (DFRLab) detail how misleading narratives and false claims about voting coalesced into the metanarrative of a “stolen election” which propelled the Jan. 6, 2021 insurrection at the U.S. Capitol.

Today, Graphika and our partners in the Election Integrity Partnership (EIP) have released the results of our months-long effort to collaboratively identify, track, and respond to voting-related mis- and disinformation during the 2020 U.S. elections, “The Long Fuse: Misinformation and the 2020 Elections.” Our partners from the Stanford Internet Observatory (SIO), the University of Washington’s Center for an Informed Public (CIP), and the Atlantic Council’s Digital Forensic Research Lab (DFRLab), will gather to discuss key findings, insights and recommendations from the final report during a virtual event hosted by The Atlantic Council on Wednesday, March 3 from 3-4:30 p.m. EST (12 noon-1:30 p.m. PST).

In November, we described how Graphika constructed a virtual Peace Room to conduct 24/7 monitoring of electoral disinformation. Over the course of its work, EIP partners focused on voting-related misinformation and the delegitimization of election results with three primary goals:

Misleading narratives and false claims about voting coalesced into the metanarrative of a “stolen election,” which propelled the Jan. 6, 2021 insurrection at the U.S. Capitol. The “Long Fuse” expands upon the coalition’s rapid-response research and policy analysis surrounding the November 2020 U.S. election, shedding light into the circumstances that amplified the “stolen election” narrative. The report includes a set of policy recommendations to describe how the  unique model of the EIP may be expanded to combat future large scale misinformation events. Among key findings:

The full copy of “The Long Fuse” is available on The EIP’s website. The 2020 election demonstrated that actors—both foreign and domestic—remain committed to weaponizing viral false and misleading narratives to undermine confidence in the U.S. electoral system and erode Americans’ faith in our democracy. Mis- and disinformation were pervasive throughout the campaign, the election, and its aftermath, spreading across all social platforms. The EIP was formed out of a recognition that the vulnerabilities in the current information environment require urgent collective action.

Please join us at Wednesday’s webinar, which is open to the public, but registering online here.

The event will begin with a fireside chat with Chris Krebs, the former director of the Department of Homeland Security’s Cybersecurity and Infrastructure Security Agency (CISA), who led the effort to secure electoral infrastructure and the response to mis- and disinformation during the election period. EIP Partners will discuss the origins and amplification of voting-related misinformation, the evolution of social platforms’ civic integrity policies and the effectiveness of their implementation, as well as how the EIP can serve as a model for future mis- and disinformation monitoring efforts.